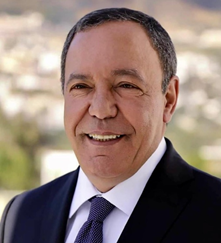 Obituary
Professor Mohammed Errami has just died suddenly in his 62nd year. It is obviously too early for this big friend of the Mediterranean Neuroscience Society, recognized as one of the best neuroscientists of Morocco if not the best of his generation. A year and half ago, he was elected President of the University Abdelmalek Essaadi of Tanger-Tetouan-Alhoceima in the North of Morocco, thus consecrating his long academic experience in one of the largest universities of Morocco. In the faculty of Sciences of this University, he headed a research laboratory of “Physiology and Pathology” focused on food intake control and biological rhythms.
Mohammed performed his university studies in the Faculty of Science of Rabat and started his scientific career in the eighties after he obtained his PhD in Neurosciences at the University of Marseille, France, in 1987, under the supervision of Professor André Niéoullon. Mohammed Errami was teaching at the Faculty of Science of Tetouan since 1987 where he acted as head of the Biology department and vice-Dean in charge of research and cooperation before he was appointed Dean of the Faculty of Science between 2009 and 2018. Mohammed was one of the pioneers and founders of the Euro-Mediterranean Neuroscience networks including the France-Morocco GDRI of Neuroscience and the Euro-Mediterranean Neuromed and NEUREN networks for collaborative research, but he was also very active in developing international teaching through the implementation of the EMN-Online master of Neuroscience. Mohammed also served on the board of the MNS Council between 2012-2017 and was a member of the local organizing committee of the 7th MNS meeting held in 2019 in Marrakech, Morocco. He had joined PhD students with some of us and he developed an inspiring vision of science and its development in his country.
There is no doubt that if his heart had continued to beat, he would have continued to defend Mediterranean Neuroscience. Mohammed was close to several members of MNS: Youssef Anouar, Abdelhamid Benazzouz, Mohammed Bennis, Loubna Boukhzar, Driss Boussaoud, Fatiha Chigr, Giuseppe Di Giovanni, Khalid El Allali, Abdelilah Elalaoui, Liana Fattore, Hanaa Hoddah, Nouria Lakhdar-Ghazal, Marc Landry, Rabia Magoul, Marie Moftah, Mohammed Najimi, Francisco Olucha, Paul Pevet, among many others.
Dear Mohammed, we are wholeheartedly with your loved ones and we wish with this “post” to send you all our thanks for your immense work and to bear witness to the affliction of all your friends, scientists or not, for your premature and so unfair departure.